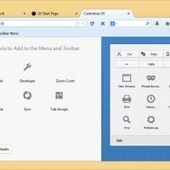 Since users are no longer just browsing but accessing “sophisticate Web apps, web-based productivity tools and social networks,” as vice president of engineering Jonathan Nightingale told TechCrunch the modern Web browser needs to give users the features they need while keeping it easy to use. He asked his team to come up with a design that takes into account how users are actually using their browsers, and the result is codenamed Australis.

Edging into Microsoft’s touch screen territory, the Web giant is said to have developed its first touch-capable laptop to run on Chrome’s operating system.

As the divide between laptops and tablets continues to shrink, word is that Google has already developed its first Chrome-powered touchscreen laptop.

According to the Wall Street Journal, the tech giant’s new device would come with cloud computing and could go on sale as soon as this year.

This endeavor would put Google in closer competition with Microsoft, which has already developed its own Windows touch-screen laptops. According to the Wall Street Journal, 25 percent of all Windows 8 laptops sold in the U.S. last month had touch screens.

Microsoft also has a major claim on the low-cost laptop market. But, Google edged into this territory over the past year too. According to the Wall Street Journal, Google sold nearly 100,000 $199 and $249 Chromebooks in the U.S. during the fourth quarter of last year.

Chrome OS already includes a touch-screen keyboard, which means that it shouldn’t be too difficult to add a touch-centric interface to the operating system, especially with Google’s experience with Android.

The company launched two Chromebooks from Acer and Samsung last year. It’s unclear which hardware manufacturer Google might have partnered with for the possible upcoming touchscreen laptop.

Having touch on a traditional laptop is a growing trend and could be commonplace in the near future — as it is for any mobile device now.